Turkey’s democracy has historically suffered from continuous coup attempts which aimed directly to overthrow the elected governments of the time. At least four successful coups have occurred in a period of 50 years and in July 15 2016 the latest attempt was executed. However, unlike the previous coups, the plotters failed to achieve their goals on the night of July 15, resulting in a triumph for Turkish unity and democracy. As such, the July 15 coup attempt can be considered as an example per se of people power which is worth studying.

July 15 Coup Attempt in Turkey: Context, Causes and Consequences presents different perspectives focusing on political, economic, sociological and psychological aspects of the factors leading up to, the events during and aftermath of this historic date. Academicians and journalists have aimed to examine in detail the coup attempt and to present an accurate account of July 15. History and current events are analyzed through an academic perspective, creating a fuller picture to better understand this most recent attempt to compromise the will of the Turkish people. 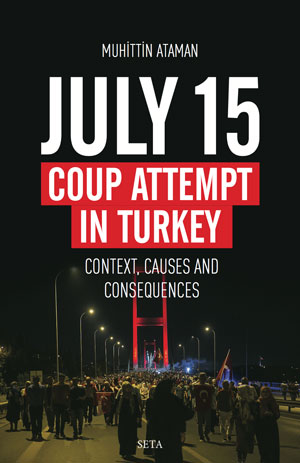 This book is dedicated to the Turkish people, especially to all the 249 martyrs of July 15 who resisted against the coup attempt to protect the national will and heroically sacri ced their lives for their country.

COUP IN TURKEY AND EGYPT: INTERNAL AND EXTERNAL DYNAMICS