On the night of July 15, 2016, a group of coup plotters organized within the body of the Turkish military, using terrorizing and violent means, embarkedon a military coup attempt in order to seize the political authority of Turkey. Following the reactions from different ranks and branches of the army, it was un­derstood that the plotters violated the chain of com­mand and the commanders-in-chief of the armed forces and the rest of the army did not take part in the coup attempt.

Therefore it appeared to be an at­tempt by a small faction from the very early hours and President Erdoğan stated that the coup attempt was controlled by FETÖ (the Fethullahist Terror Or­ganization). Turkey has a history of military coups; however the July 15 coup attempt, in many aspects, can be distinguished from the coups and juntas of 1960, 1971, 1980 and 1997. The most striking differ­ence being that, the plotters used terrorizing means such as opening fire against the people in the streets from tanks and helicopters. However, the fact that they have used these means does not mean that they cannot be considered as a junta. 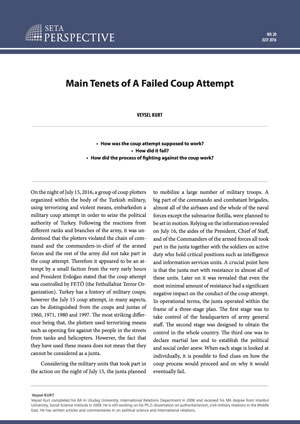 How was the coup attempt supposed to work?

How did it fail?

How did the process of ghting against the coup work?