The way the ‘Western’ media covered the coup attempt in Turkey on July 15, 2016 is quite remarkable. ‘Western’ is put in quotation marks, since this short study does not aspire to an analysis of all Western media. Rather, ‘Western’ here means the tendency of the vast majority of media coverage in the largest media outlets such as The New York Times, Frankfurter Allgemeine Zeitung, and Courrier International. In the coverage of the coup attempt, which presented itself as saving secularism, we draw on Edward Said’s notion of Orientalism.

Orientalism serves ‘Western’ powers to rationalize European colonialism based on a self-serving history in which the “West” constructed the “East” as extremely different and inferior, and therefore in need of Western intervention or “rescue.” This study looks at how the coverage of the media coup in large ‘Western’ media outlets was essentially an Orientalist approach. 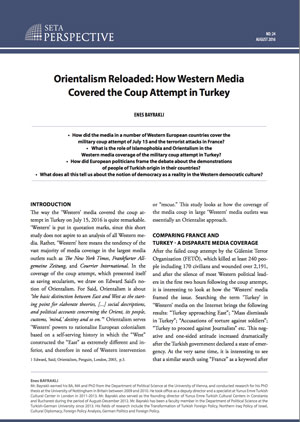 For Said, Orientalism is about “the basic distinction between East and West as the starting point for elaborate theories, […] social descriptions, and political accounts concerning the Orient, its people, customs, ‘mind,’ destiny and so on.”

How did the media in a number of Western European countries cover the military coup attempt of July 15 and the terrorist attacks in France?

What is the role of Islamophobia and Orientalism in the Western media coverage of the military coup attempt in Turkey?

How did European politicians frame the debate about the demonstrations of people of Turkish origin in their countries?

What does all this tell us about the notion of democracy as a reality in the Western democratic culture?