Understanding the Ideational Sources of the Terrorist Coup Attempt

A major difficulty in understanding the Gulenists’ endgame and their involvement in the coup d’etat derives from the group’s ontology. Outsiders are con­fused about their organization and methods of opera­tion due to their secretive nature, cult-like operation, cell-based structure, strict hierarchy, and extensive use of dissimulation. However, for those whose life ever crossed paths with that of the group (regardless of the extent of this conjunction), the Gulenist meth­odology of recruitment and infiltration is common knowledge.

It is for certain that they have been laying the groundwork for a complete takeover of the state for decades. Considering the ranks of the captured military officers including the generals, one could argue that the terror organization has been operat­ing within the Turkish army with varying capacity at least since the mid-1980s. They have been following three main strategies to expand their influence and operational capabilities in the army: infiltration, con­version, and the formation of alliances. 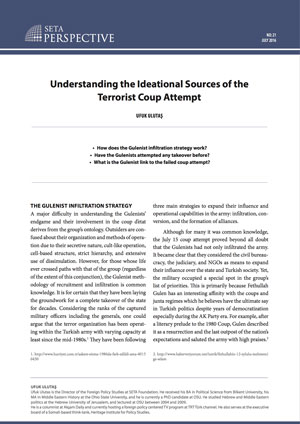 How does the Gulenist in ltration strategy work?

Have the Gulenists attempted any takeover before?

What is the Gulenist link to the failed coup attempt?