The Triumph of Turkish Unity against the Coup Attempt

Seen from such a perspective, the Fethullah Gülen terrorist movement (FETÖ) in their last attempt to destroy the democratic structure of the Turkish state failed to know their enemy. While FETÖ considered the elected government as their enemy, another unexpected ‘enemy’ emerged –and that was the Turkish citizens. FETÖ did not realize the power of the Turkish people and took a malicious but blind step that backfired. They underestimated the fact that Turkey is a democratic state whose government is elected by the will of the Turkish citizens and that these people were willing to sacrifice their lives for the sake of their nation. Consequently, it is no wonder that they succumbed in a matter of hours. Calling this coup attempt a ‘battle’ may be considered an exaggeration by some but for those who witnessed what happened that night it is not so. 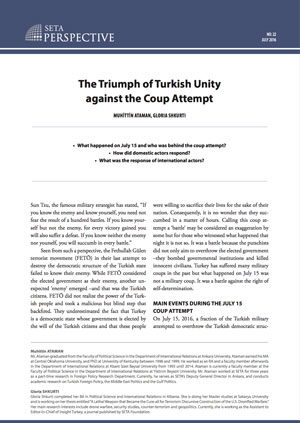 What happened on July 15 and who was behind the coup attempt?

How did domestic actors respond?

What was the response of international actors?