The Triumph of Turkish Democracy: The July 15 Coup Attempt And Its Aftermath

The night of July 15 was the longest night of Turkish Democracy. In the course of this night, members of Fetullah Gülen Terrorist Organization (FETÖ), which has been infiltrating the Turkish Armed Forces for about four decades, tried to stage a military coup to overthrow the democratically elected government and suspend the constitution of the Turkish Republic. During this night, the Gülen coup attempt was defeated mainly by the peaceful civil disobedience of Turkish citizens from all segments of Turkish society.

Turkish people realized that the democratic order of their country was in danger of being abolished by the followers of a false messiah. They realized that this was also an assault on their freedom, independence, and the future of their children. That’s why they were ready to sacrifice their lives –a sacrifice that they made. The tally of the casualties was shocking: 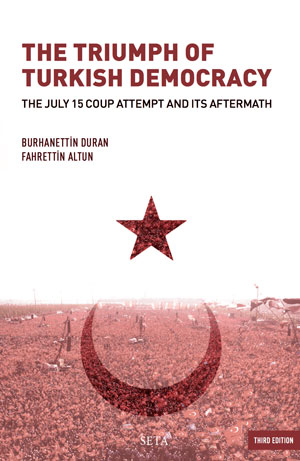 FETÖ members massacred 240 people, of which 173 were civilians and injured another 2,195 civilians. The aim of this book is to overcome the prejudice and the misunderstanding against Turkey by analysing the events that took place on that night and the developments that followed.

THE JULY 15 COUP ATTEMPT: THE LONGEST NIGHT AND BEYOND

THE RESISTANCE OF THE PEOPLE AGAINST THE JULY 15 COUP ATTEMPT

YENİKAPI SPIRIT AND WHAT IS NEXT