The Resilience of the Turkish Economy after the Failed Coup Attempt

Turkey has lived through the biggest trauma in its recent history, as the members of the Gülen Terror Organization (FETÖ) attempted a coup d’état on July 15, 2016. However, the heroic people of Turkey managed to quell this sordid attempt by literally standing unarmed against flying bullets and tank shells. Together with the people were the police, loyal soldiers and politicians, first and foremost being the president Recep Tayyip Erdoğan. As a country which has just survived a coup attempt, Turkey has astonished many with its political resilience. While systematically neutralizing coup plotters in multiple governmental organizations, such as the military, judiciary, bureaucracy, health and education sectors, which had been infiltrated by the FETÖ, the government preserved its functionality and managed to perform as normal. In the same vein, to the astonishment of many, the Turkish economy showed great resilience in the aftermath of the failed coup attempt. Even in the first working day after the coup attempt, there was no panic in the financial markets.

The Turkish lira only marginally lost its value against the US dollar and there was no rush on banks or bonds. In fact, the effect of the coup attempt on the financial markets was barely discernable. The Turkish democracy and economy have survived major setbacks in recent years and proved their resilience, the true extent of which has been understood more clearly in the light of the failed coup attempt. 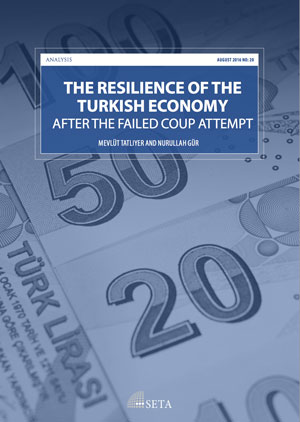 The Turkish policymakers managed this crisis in a calm and professional manner. While immediate actions were taken to meet the needs of the financial markets, it was also clearly underlined that the Turkish economy would continue to work within the rules of the market. In addition to these policy actions, a well-functioning financial system, strong public finances, a dynamic real sector and a moderate current account deficit helped the Turkish economy to stay afloat against the failed coup attempt.

SNAPSHOT OF THE TURKISH ECONOMY

ACTIONS OF THE ECONOMIC MANAGEMENT TEAM AFTER THE FAILED COUP ATTEMPT

THE SAFE AND SECURE FINANCIAL SYSTEM OF TURKEY